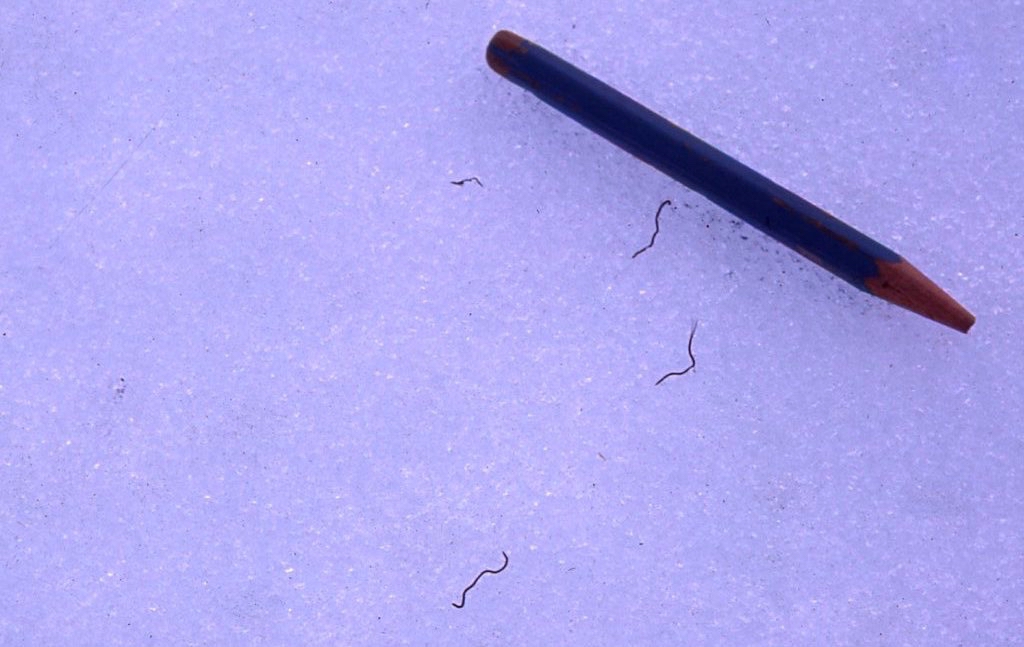 Save the Ice Worm

Have you ever heard of ice worms? You may have come across the “Ballad of the Ice Worm Cocktail” by Robert Service who went to the Klondike during the gold rush. But few people have actually seen these worms, let alone held one in their bare hand and watched it squirm as the surrounding ice melted.

I first saw the little critters, one-half to one inch long, years ago when working on the Blue Glacier in Washington State. But I just learned recently that watermelon snow, the algae growing on the surface of glaciers, was the primary food source for the ice worm. Those who follow my blogs have heard me mention watermelon snow many times, since it is also the title of my first novel.

Ice worm bodies are adapted for thriving at about 32 degrees F, right at the freezing point of water. In fact, they can’t survive if their temperature rises to 40 degrees or above. So as the world’s glaciers melt, ice worms are threatened, just as are the polar bears and other creatures we care about that depend on ice for their survival.

Ice worms burrow deep into crevices in the snow and ice during the day and return to the surface to feast at night on algae and dust particles carried on the wind. I recall seeing only a few scattered worms during our hikes across the glacier, but apparently, there can be millions of them out of sight only to reappear as the sun goes down. So many, in fact, that people have described how difficult it is to walk across the snow in the evening and avoid squishing them under foot.

Other than another curiosity of nature, why should we care about the ultimate fate of ice worms? They provide food for birds (migrating rosy finches and snow buntings) as an important component of their diet. But we don’t eat the worms or the birds. I consider the worms to be an important symbol of the many species that are becoming extinct in increasing numbers with little or no awareness by humans. “Save the ice worm” sounds like a silly slogan. We may not be able to protect them from habitat loss, but where do we draw the line? At some point, we humans could be next.

Are you aware of species loss due to global warming? Have you ever seen ice worms?

Next Post: “Bunker Fuel” Sounds Bad—It’s Worse Than It Sounds

I saw ice worms on nearby Mt. Adams in Washington state years ago. Unfortunately, thousands of species have been lost to the world long before industrialization. But, hey, let’s keep the little critter ice worms!

Susan, thanks for the comment. We used to see Mt. Adams on the horizon when I was on Mt. Olympus—small world. One concern is the increased rate of extinctions, which could disrupt a healthy balance (from the human perspective). I also think it particularly sad when humans are the cause, as in the case of the dodo bird.

Bill, i coined a new word re grief or distress over species loss: google “speciestalgia”. Maybe you can use it in future posts. Dan

Thanks for the suggestion. Like the term “cli-fi” that you created, this new one packs a lot of meaning. Like so much about climate change in general, we are experiencing losses that trigger emotions. The response to photos of starving polar bears is an example. The problem is that most species losses take place totally out of our awareness as humans. Maybe speciestalgia can help draw attention to this issue.