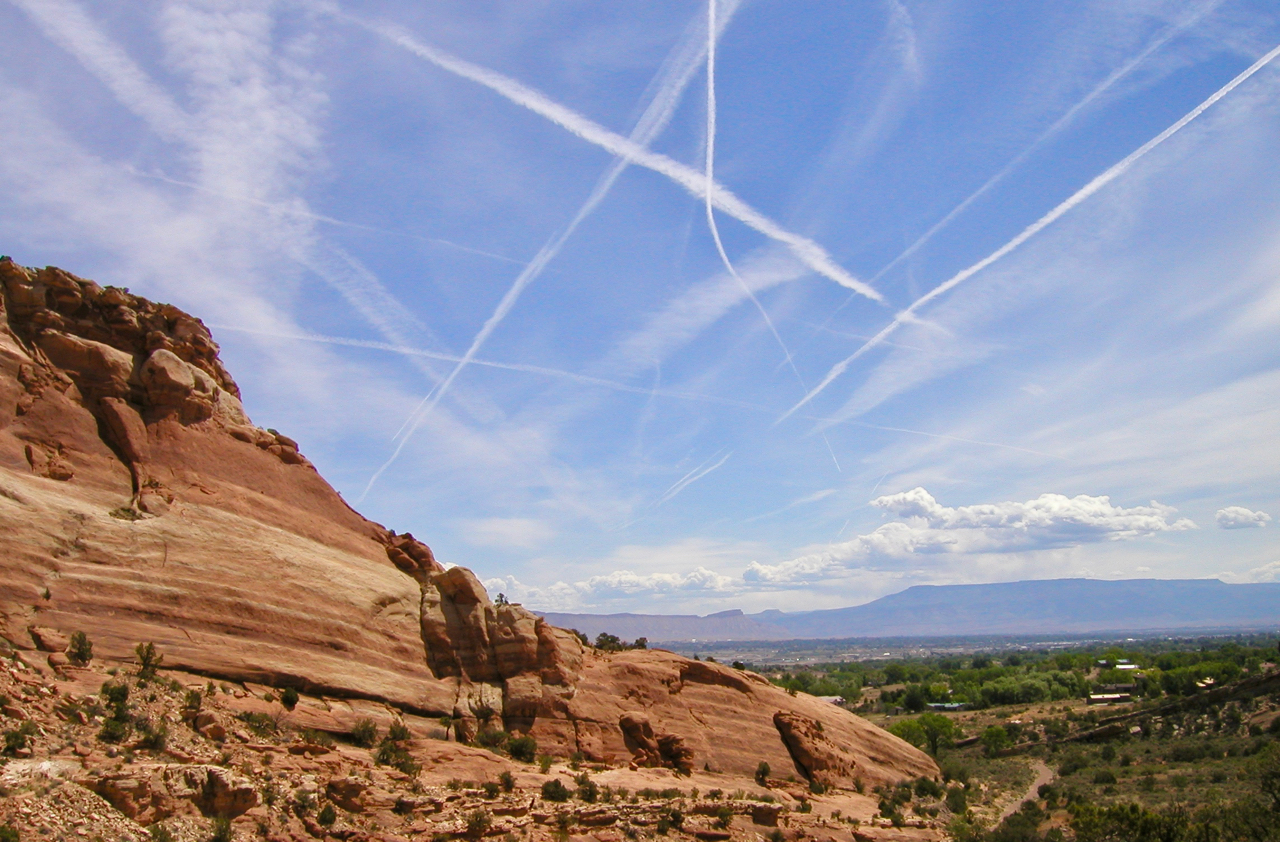 Some people hold the understandable belief that the world is so huge that humans could not possibly affect our weather or climate. Well, evidence to the contrary appears over our heads almost daily in the form of contrails. These are the long skinny clouds that form high in the sky and usually take the shape of straight lines, although occasionally they curve or break into segments. Humans never saw these clouds before World War I when aircraft were capable of flying high enough to trigger their formation.

The term “contrails” is short for condensation trails and are “composed primarily of water, in the form of ice crystals.”  The engine exhaust and changes in air pressure from wingtip vortices produce these unique clouds, which typically form miles above the earth.

These clouds sometimes appear and dissipate in minutes, but at other times they remain for hours and spread across a significant portion of the sky. These long-lasting clouds have been studied to determine their effects on weather and their possible long-term climatic impact. One study showed contrails increased cirrus cloud formation over the United States between 1975 and 1994 and resulted in an estimated increase of 0.2 to 0.3 degrees C warming per decade.

A particularly interesting “experiment” to test this notion presented itself when all commercial aircraft were grounded across the United States for three days immediately after the 9/11 World Trade Center attacks.

The aircraft grounding corresponded to rising daytime temperatures, thought to be caused by the lack of contrails blocking sunlight, and falling nighttime temperatures, due to the lack of heat trapping by these same clouds. The net effect was an increase of 1.8-degree C in the spread between day and night temperatures. Although this was a limited study with a variety of uncontrolled factors, it showed how contrails may affect our climate.

Conspiracy theories have emerged in recent years, attributing malicious intent to the production of these cloud patterns and calling them “chemtrails” instead of contrails. The proponents of these theories say that clandestine government agencies have been using jet aircraft to inject chemicals of various kinds into the upper atmosphere without the knowledge of the general population.

Why would the government do that? Some say to test forms of geoengineering to cool the planet. Others say the chemicals are intended to control the population and that chemtrails are making them sick with respiratory ailments. These arguments, voiced in radio talk shows and promoted through social media, have been soundly refuted and debunked by scientists, as widely reported by mainstream media.

We are likely to see more contrails forming in the future since the amount of passenger air travel has been increasing steadily and expected to double world-wide by 2036. Regardless whether this is a good thing or not, we can see how humans impact our planet every day. All we have to do is look up.

Have you noticed contrails are more prominant on certain days? Did you wonder if they affect our weather?

Next Post: Our Future World – Shaped by Ice on the Move

Since mainstream and social media have now lost all credibility, and even scientists are suspect, it’s hard to know what to believe these days. And the solution to contrails is…?? Ground all jets?

Susan, thanks for the comment. I guess we always needed to know something about the source of our information, but I agree it has gotten much worse recently. Some sources still seem more trustworthy than others.

Good question about contrails—I don’t think there is a solution. Be aware of the impact we have when we travel by air. It’s similar to the greenhouse gases that jet engines produce. Maybe we fly a little less.

I’ve always been curious about the contrails. Thanks for the info!

Thanks for your comment, Sarah. I find this a fascinating topic. I look to the sky more frequently now.