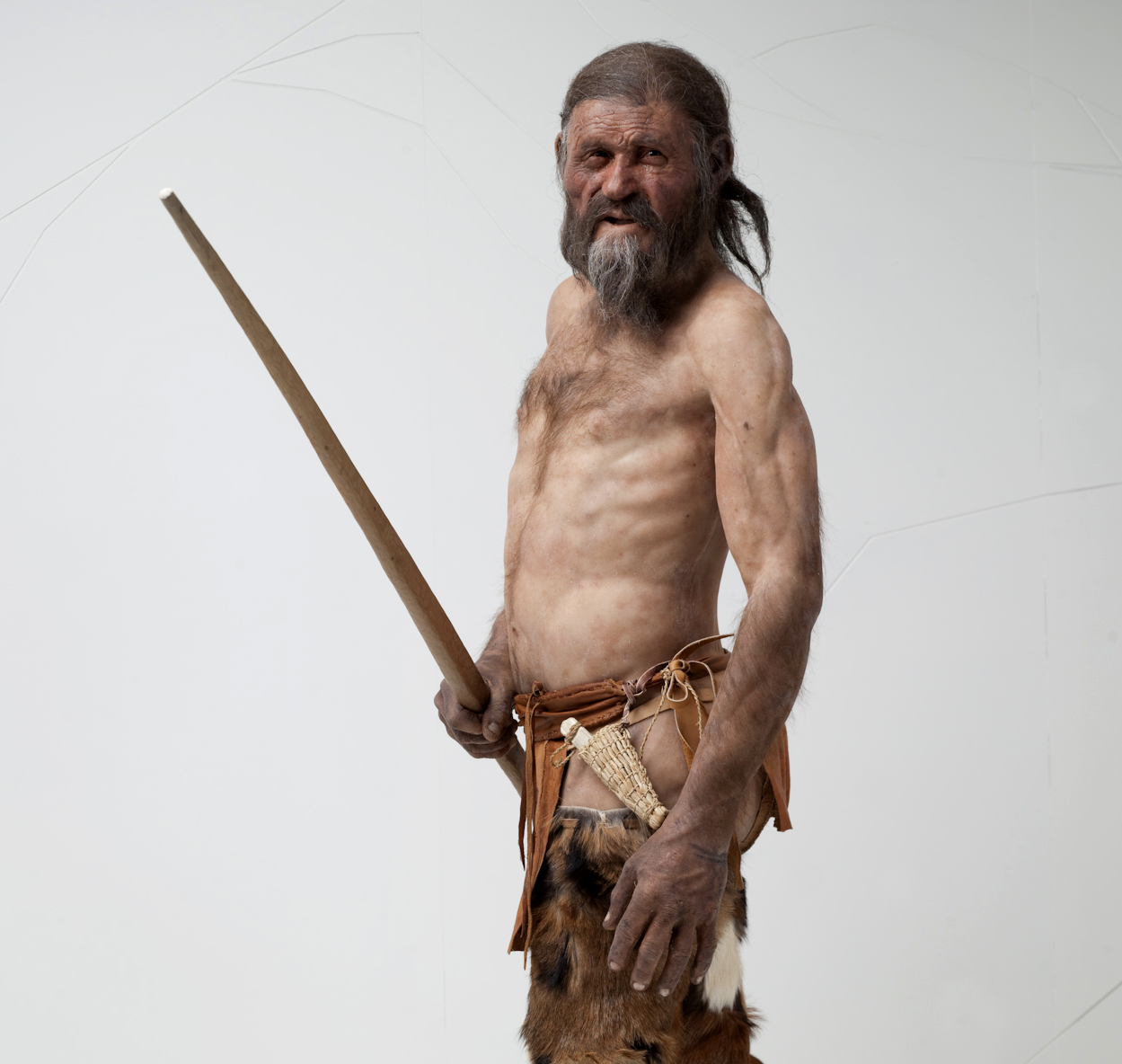 The Ötzi Iceman: Praise for N-of-1

How many 5,300-year-old men do you know who have melted from a glacier? Not many, I’m sure. Meet the Ötzi Iceman whose reconstructed likeness is pictured above. His skeleton was discovered in 1991 by climbers high in the Alps near the border between Italy and Austria. His mummified remains were exposed because the ice that had encased them for thousands of years was receding due to climate change. After the climbers contacted authorities and it was determined that the body was prehistoric and one of a kind, the remains were relocated to a refrigerated room in the South Tyrol Museum of Archaeology in Bolzano, Italy for scientific study.

A recent article published in the online magazine GlacierHub tells us, “Countless studies of Ötzi and his belongings have furnished invaluable gifts of information about early human history that would otherwise be unknown.” For example, the rare copper head of the iceman’s ax was traced to an ancient mine in central Italy, indicating widespread trading at the time. The arrow wound that ultimately killed Ötzi told scientists that he was being chased and shot from behind. His diet was revealed by studying morsels of food he carried and the contents of his stomach.

I was drawn to a recent article describing how scientists had determined which valley he had walked through on his way to the barren mountain pass where he died. They used the clues provided by pollen, spores, and fragments of moss found on and inside his body to isolate the specific route he may have taken.

This was similar to the study of pollen and spores (a discipline called palynology) that Kate used to study the carcass she discovered thawing from the ice in my novel Watermelon Snow. Her objective was to learn as much as possible about the climate from the vegetation the creature had passed through before it died. The parallel was even stronger when it was revealed that Ötzi was being tracked and killed by an arrow in his back just as the creature in my story was apparently being hunted and wounded by a spear found embedded in its side.

What struck me most is that in both cases a large amount of information was gleaned from the thorough study of a single specimen, what in statistical terms would be considered an “n-of-1.” This violates a common claim that you can’t conclude anything because your sample size is too small. Some would argue that you need a bell curve distribution, which would require a minimum of about 30 instances of something before you can draw any conclusions.

This is an example of an old controversy between two different approaches to deriving scientific knowledge—ideographic vs. nomothetic analysis. The thorough study of a single specimen like the Ötzi Iceman is an example of ideographic analysis. It can reveal a great deal of useful information. Common sense tells us that it’s unreasonable to wait until you’ve found 29 more frozen icemen to analyze before drawing any conclusions.

Nomothetic analysis, on the other hand, uses the power of statistics to glean insights and make generalizations about a population. It is no wonder that this approach has become synonymous with the scientific method in some people’s minds, because statistics is a powerful tool for identifying patterns and determining whether they are significant or not. We are often exposed to the results of surveys comparing the popularity of political candidates and are told that the differences we perceive may or may not be statistically significant. Our confidence in the results comes from ruling out chance or random factors when explaining our findings.

Both approaches to analysis have their use, and neither is the only right way. They are often used in combination to study a phenomenon thoroughly. But the nomothetic (large-sample) method has been the scientific standard for so many years that it is noteworthy when the ideographic approach is used instead.

Nowhere is this contrast more apparent than in the current practice of medicine. For years the effectiveness of drugs and treatments were determined through the “gold standard” of clinical trials and control groups. Recently, however, physicians have begun to study individual patients and their responses to various treatments. In fact, the profession has adopted the term “n-of-1 clinical trial” to describe the focus on the peculiar needs of a single patient in order, for example, to harness the person’s immune system to fight cancer.

So, think of the Ötzi Iceman the next time you hear that you can’t conclude anything from small samples or an n-of-1. The value of a scientific discovery is not always determined by the number of times it occurs.

Can you think of other instances where we’ve used an n-of-1 method for analysis? (Hint: the moon) What are other discoveries revealed recently by melting glaciers? (Some examples in my next blog.)

Rick, Thanks for the comment. Although we can’t stop the melting of glaciers due to global warming (any time soon), we can learn a lot about the process and the history of the earth from all the things that are revealed by their melting. Bill