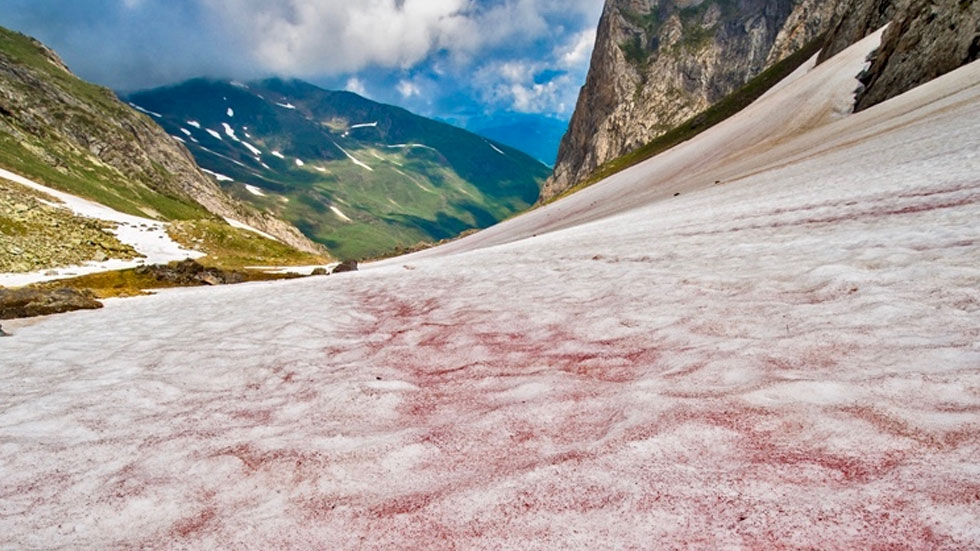 What the Heck Is Watermelon Snow?

When I was a teenager hiking above timberline with a friend in the mountains of my home state of Colorado, I came across a large patch of snow that had survived the summer in an area of broken scree rocks and tundra. Curious swaths of pink color ran across the surface. My friend told me, “Scoop some up. Sniff it.” When I did, I shouted, “Watermelon!” He then said, “Better not taste it—could upset your stomach.”

Watermelon snow, sometimes called blood snow, is actually a microorganism or alga (scientific name: Chlamydomonas nivalis) that forms on the surface of snow exposed to the elements for long periods. The pinkish color is a pigment the algae produce to help protect them from exposure to the sun’s UV radiation.

When I ask people if they’ve ever heard of watermelon snow, most say no. The phenomenon is still relatively obscure—not surprising because it forms under harsh conditions in remote places. Most reporters introducing it to the public allude only to the color of the algae as the source of its name, failing to mention its distinctive watermelon aroma.

Recently, due to rising concerns about global warming, watermelon snow has made headlines. Studies have shown that its pink pigment lowers the reflectivity of the snow, known as “albedo,” causing it to absorb more of the sun’s radiation. The result—faster snowmelt—is disturbing given the accelerating loss of ice around the world. Researchers recommend adding watermelon snow to their models predicting future rates of melting.

Watermelon snow has other characteristics probably even less well known. Pharmaceutical researchers have investigated the algae for its antioxidant and other beneficial properties. The cosmetic industry has done studies on what they call snow algae extract for improving the health of the skin.

So, watermelon snow is a mixed blessing concerning to environmentalists while promising to others. In either case, I predict we’ll be hearing more about it as scientists work to spread the word about climate change.