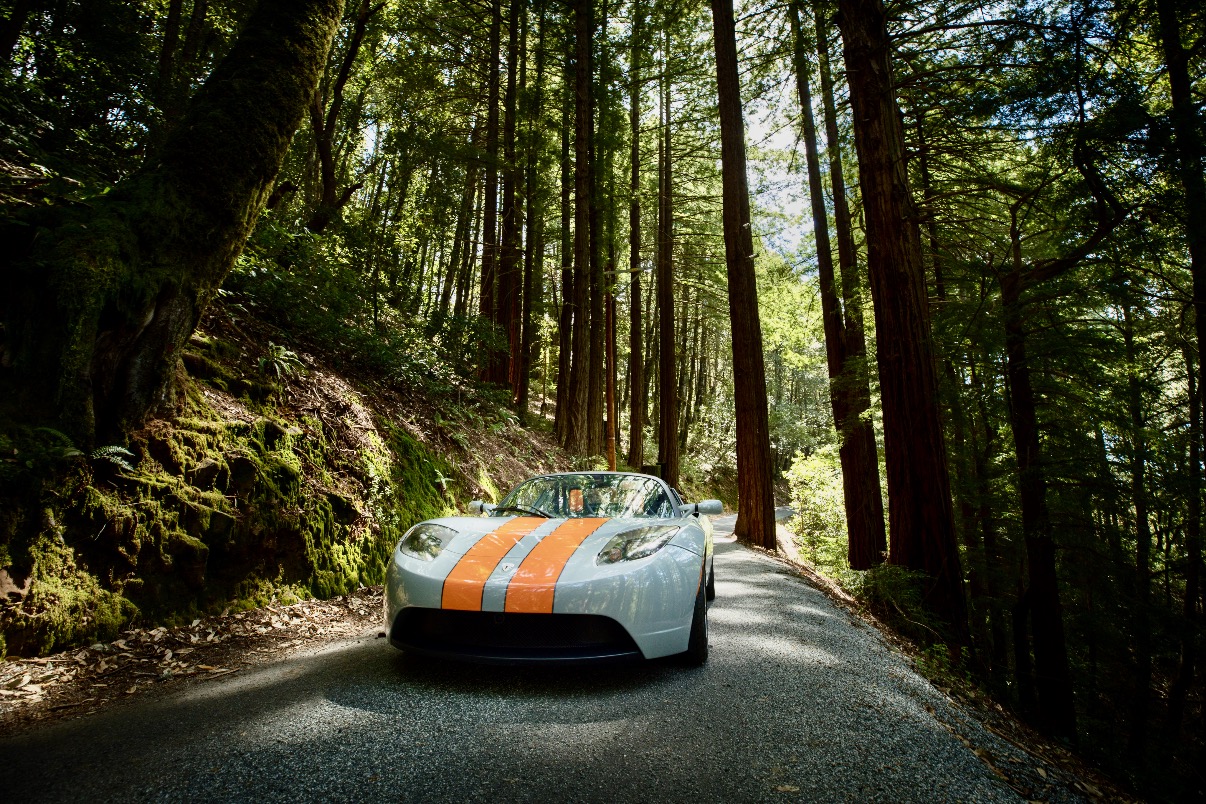 The story of Tesla is the saga of a young, idealistic engineer Martin Eberhard.  He co-founded Tesla Motors because he saw the need to abandon fossil fuels in order to stop carbon dioxide pollution of the atmosphere by automobiles. I am grateful that Martin, my wife Nancy’s nephew, agreed to share some of the rationale for his revolutionary automotive adventure.

What is your training and background?

I have an undergraduate degree in Computer Engineering, and a MS Degree in Electrical Engineering, both from the University of Illinois in Urbana-Champaign. I spent most of my career in startup companies here in Silicon Valley in a mix of engineering and management roles.

I am named as an inventor on around 30 patents, covering the breadth of my career, from computer keyboards to graphics to electronic books to electric cars. 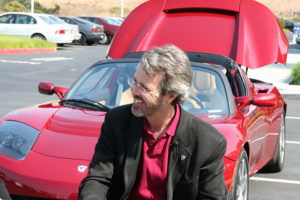 What led you to focus on developing an electric automobile?

With the Middle East wars of the early 2000’s and the increasing obviousness of the problems caused by spewing carbon dioxide into the air, it was clear to me that we needed to ween ourselves off of fossil fuels.

I was not at first a proponent of electric cars – just cars that did not require fossil fuels. I spent a lot of time between 2000 and 2002 studying the well-to-wheel efficiency and carbon footprint of every possible fuel choice for cars. I kind of expected to find that hydrogen fuel cells were the answer because this is where the entire automotive industry had gone when they abandoned electric drivetrains – once they managed to get California’s ZEV mandate gutted.

My research convinced me that (despite the auto industry’s move), the electric drivetrain was by far the most efficient and lowest carbon footprint of any drivetrain choice I could find.

A surprising result of this research was discovering that the well-to-wheel efficiency and carbon footprint of hydrogen fuel cell cars was not any better than ordinary gasoline! As I learned, hydrogen is not actually a fuel – it is an energy carrier, as is a battery. Free hydrogen does not exist in nature – it must be created, typically from natural gas, or from water, with the input of a lot of energy.

There have been other electric cars in the past. What was unique about your approach?

I have a lot of respect for people who tried to make electric cars succeed in the past. Most were motivated to solve the same problems – pollution and resource consumption. But just about every (failed) electric car company in the past had tried to enter the market at the low end, making their first car as an affordable car, competing against the lowest-priced gasoline cars.

The trouble is that the drivetrain components (particularly the batteries) are new technology, and as such are not yet cost effective at the low end. On top of that, a small start-up company will pay a lot more for every automotive component – tires, suspension parts, carpeting, seats, airbags, brakes, everything. So even if a start-up company tried to make an ordinary gasoline car, their car would cost a lot more than the competing car from Ford, Honda, Fiat.

Despite the good intentions of these past electric car companies, I felt it was a mistake to expect a new technology to compete on price against the old technology. This is not how new technologies get introduced. Flat-screen TV’s started out fabulously more expensive than CRT-based TV’s. Refrigerators were luxury items, all but the rich used just ice boxes at first, etc.

So I decided not to compete on price for the first Tesla model, but rather to compete where the electric drivetrain can really shine – competing on performance. Once I got over the notion that the Tesla Roadster had to be low cost, several technologies that had been off the table became possible. The two biggest of these were 1) lithium ion batteries. Prior to the Tesla Roadster, practically no electric car had used lithium ion, choosing instead either old-school lead acid or the somewhat better Nickel Metal Hydride. 2) AC induction motors, which offered a much better overall performance than did the typical DC motors used in most other EVs.

By focusing on performance and on true sportscar looks and handling, the Tesla Roadster shattered everyone’s expectations of what an electric car could be. Suddenly people saw that an EV was not a compromise at all – in many ways it was already vastly superior to gasoline-powered cars. And with a much lower carbon footprint on top of the superior performance.

From the beginning – from the original Tesla business plan that I wrote – the plan was to use the roadster to change the EV paradigm, to establish a unique brand, and to learn how to make production cars. With these accomplishments, we planned to move into other sectors of the automotive market, starting with a family-sized sedan, and continuing to move down market as we learned how to drive costs out of the cars.

How did you arrive at the name Tesla for your company?

I named the company Tesla Motors to honor Nikola Tesla, who invented and patented the AC induction motor over a hundred years ago.

What do you see as the future of electric vehicles?

So long as cars are part of our transportation, they will continue to become more and more electric. The days of fossil fuel cars are numbered.

What projects have you been involved with since the Tesla?

I spent a few years working for VW/Audi on a prototype vehicle that became the R8 eTron. It was extremely educational for me to work for a large company like that, a company with a considerable legacy of gasoline and diesel cars. (The subsequent “dieselgate” scandal at VW helped me to understand some of the peculiar behavior I saw while working there!)

Since then, I’ve been working on projects around improving automotive and stationary battery systems.

As an electrical engineer, how do you decide what important problems need solving?

Engineering is just a set of tools that can be used to solve problems. Throughout my career, I have looked for the intersection of real-world problems and skills that I have, or at least think I can acquire quickly enough.

What responsibility do engineers have to consider the social context of their inventions?

Particularly with the rise of AI (Artificial Intelligence), it has become very clear that engineers need to consider the wider implications of the work they do. Just because something is possible does not mean it is a good idea, or that it will be good for humanity. Today, a good engineering education needs to include an element of ethics, so that engineers have the tools to think about the consequences of their creations.

I am quite concerned about the wide deployment of AI, now that computing power and connectivity make this technology quite powerful. I have been told that this is a Luddite position – every past industrial revolution has caused short term pain, but workers eventually learned new skills, often with improved standards of living as a result. But AI is different. Unlike past technological advances that made one skill or another obsolete (weaver, train fireman, factory worker, etc.), AI makes skill itself obsolete. Whatever new skill might be proposed as a replacement for a worker who lost his job to AI, I submit that AI can and will learn that new skill faster and perform it better than a retrained worker.

Great interview–thanks, Bill! We love our Tesla Model 3 and Nissan Leaf, too….electric is the way to go! 🙂

Thanks Rick, I totally agree about electric being the way to go.

It was a brilliant idea for Martin to create a high performance EV, and he pushed the auto industry in this direction. I hope history will remember him for having the inspiration and changing the world. Telsa wasn’t created by that Pay-Pal guy.

Thanks for the comment, Matthew. Martin made a huge contribution to automobiles and to the planet. I agree he deserves the recognition and credit.

Fascinating Interview. Martin Eberhard is a true visionary. (Not just the Tesla, but patents on computer hardware and electronic books.)

Personally I can’t yet justify the cost of Tesla. Full solar on the roof generates enough electricity to fully charge a Tesla, so no fuel cost for me, not even the cost of electricity. But the savings of a zero fuel cost doesn’t yet justify the price differential between a good hybrid, like the Ford Fusion, compared to a Tesla. I hope Tesla prices will come down as it develops more fully.

As another commenter stated, kudos belong to Martin Eberhard, not to that Pay-Pay guy who bought out the company and then declared himself a “founder”.

Thank you Old Goat. I know what you mean about costs, but we sure see a lot of Teslas driving around Boulder. And yes, Martin needs to have the recognition he deserves.

Bill, I really enjoyed reading the interview and learning about the origins of Tesla.

Your connection is more validation for the small world theory.

Thanks Howard. I’ll bet a lot of people didn’t know this story. Martin is an inspiration.

Dr. Liggett, I did not know that Mr. Eberhard was the co-inventor of the Tesla. I also learned a new term—well to wheel. I have heard anecdotally that electric cars cause less carbon emission than petroleum fueled cars, but I had not heard that the same applies to hydrogen. I have driven a hybrid since 2014 and have been pleased with its performance and economy. I am concerned about the effect of lithium on the environment. Thanks for sharing the interview. Spin.

Greg, thanks for the comment. Good to hear from you. Most people don’t know about Martin’s role in inventing the Tesla. Elon Musk helped fund the company and run it after it had been formed and the first car already designed. I often read how battery technology keeps advancing and there are some promising alternatives that may be superior to lithium. For now, lithium is the battery of choice.

An interesting, informative interview, Bill. It motivated me to read up on Tesla Motors. It is a shame that visionaries and innovators like Martin Eberhard and his co-founder Marc Tarpenning often lose control of their start-up companies to financiers like Elon Musk. The same fate happened a hundred years ago to Nicola Tesla, a man of enormous vision and creativity.

Chuck, thanks for your research and thoughtful comment. You picked up on the parallel theme between Tesla the man and Martin’s experience with Tesla the company. They both made huge contributions.