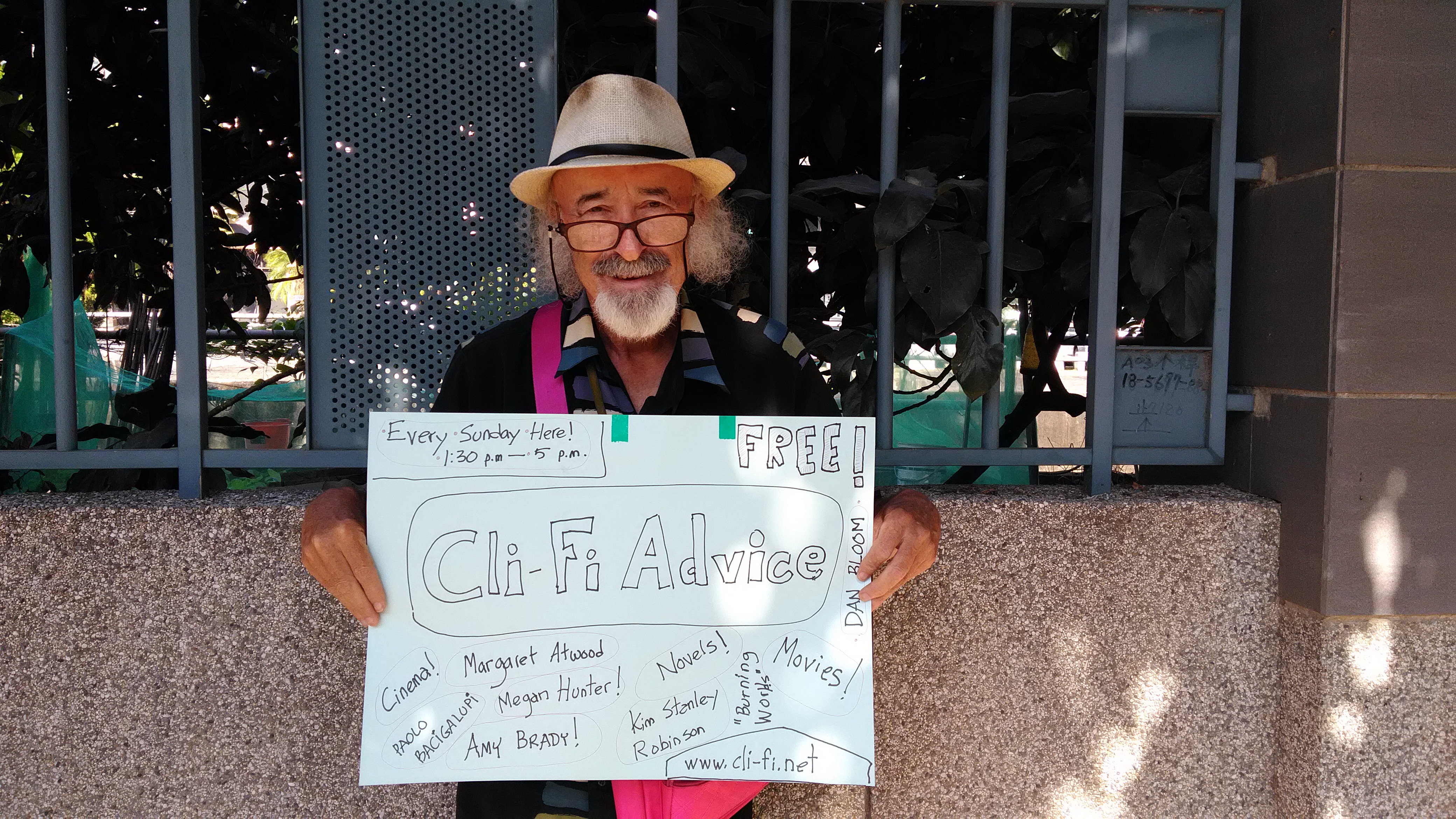 I first met Dan when a friend sent a tweet about my climate fiction novel, Watermelon Snow, and used the hashtag #clifi. Dan himself responded, opening my eyes to the new genre of climate fiction (cli-fi) and Dan’s website cli-fi.net.  Soon I began seeing references to cli-fi in articles about fiction writing, education, and popular books. Dan actively supports authors in this genre, new and veterans alike. He wrote an article about me and Watermelon Snow at the time of its launch in 2017.

He generously agreed to  an interview about how “cli-fi” came to be and the impact it has had.

What led to your interest in climate fiction?

I had been following the news about the IPCC report in 2006 in newspapers in the UK and the USA online since that time. I became alarmed that humankind was in big, big trouble, given what commentators and op-ed writers in the New York Times and The UK Guardian were saying about the ramifications.

In January 2007, I became very depressed, psychologically depressed, blue, over what I had been reading and digesting about that IPCC report, the first of several that would be published over the next ten years. I was so “blue” about the future of humankind as a result of what I learned from the IPCC report that I went around moping for nearly a month. I lost interest in life. I had never experienced such a deep funk before about climate change.

But one day, I decided that being blue was not a good thing to be for too long a time, so I sat down at my computer and I wrote an 800 word op-ed on my blog titled “People Get What They Deserve” and I subtitled it “PIGSWANTED” which took the initials of the title P and G and W and T and D and playfully turned the initials into a saying I created from the initials by filling in the spaces to mean “People Get What They Deserve.” Then I dove in and wrote a very strong essay saying that given the results of the 2006 IPCC report, humankind was doomed, and we brought it on ourselves for being too greedy and not caring more about the Earth — and that in fact we deserved the doom that was coming down the road in perhaps 100 years or so.

After I read what I had written, I felt that the creative process of processing my deep funk into a personal essay helped lift my spirits, and my mood immediately brightened. I felt happy and joyful again, my usual self. And that creative deep dive into my blue feeling made me realize that words matter, and that I needed to use my writing skills to sound the alarm about the risks of runaway global warming with more essays and op-eds and blog posts and PR ideas.

What inspired you to come up with the term “cli-fi”?

I began to think about the possibility of novelists and movie directors using novels and films to sound the alarm to a wide public and I needed a name for these kinds of books and movies. Sitting outside at a sidewalk cafe in the little town in Taiwan where I had been living since 1991, I ordered a beer and a plate of noodles and started making some notes about what to call these novels and movies.

I wrote down 20 possible names and the one I liked best was “climate fiction” based of course on the earlier literary term of ”science fiction,” and then just as science fiction was nicknamed as “sci-fi” I decided make a nickname for climate fiction and called it “cli-fi” with the same rhyming sounds as sci-fi.

But I felt that this was a nickname that had two important roles to play in science communications and in literary ideas:

When and how did you first introduce “cli-fi” to the world?

My first attempts at introducing the cli-fi term to the world met with dismal failure. Nobody picked up the term and nobody retweeted my tweets. For the next four years, the cli-fi term went nowhere.

To see if anyone liked what I was doing, I put the word on my blog and sent the link around to people I knew via Twitter and emails. Most people said to me: “You can’t do that! You can’t just create a new literary genre like that!” I listened to what the naysayers were saying to me, and I didn’t mind their criticism, but I replied: “Oh yeah? Watch me!” And now in 2019, here we are! My website The Cli-Fi Report at cli-fi.net carries on my creative thinking.

What impact has the term had so far?

It has had an enormous impact, far beyond what I had imagined when I first wrote the term down on a napkin at that sidewalk cafe in Taiwan on a hot summer day. It has been accepted by literary critics and academics, and headline writers at many magazines and newspapers and websites have been using the term almost daily since 2013 when NPR radio network broke the ice, so to speak, with a radio segment on April 20, 2013 that went viral online, both as a 5-minute audio segment and as a transcript of the segment on the NPR website.

After that NPR piece on ”the rise of a new literary term dubbed cli-fi” there was no stopping it. News stories with headlines using the cli-fi term appeared in the New York Times, the UK Guardian, the Atlantic magazine, Slate and Salon and Grist and the BBC. The term was also used in newspapers in Australia and in France, Italy, Spain and Taiwan. Huge impact for a short 5-letter term. It worked.

Cli-fi seems to be moving into mainstream use. How do you account for this?

When NPR and the New York Times and the Guardian in London wrote articles and headlines using the cli-fi term, the mainstream media started to pay attention. Google the term now and you can find over 5,000 links worldwide and not just in English. It all happened by pure luck, hard work on my part promoting the term 24/7 without a day off from my email and Twitter messages to media people and literary critics worldwide, and by what some people might call “cosmic convergence.” The term, the feeling, the sense of what it stood for, was in the air. I like to say that I didn’t give birth to cli-fi, it gave birth itself. I was just the mid-wife.

You’re often given credit in articles for the term cli-fi. How do you account for your name being consistently associated with the term?

Well, I was there at the beginning of the mainstream media becoming interested in the term, given the fact that since 2013 climate change and global warming was on every newspaper editor’s mind. I was just the PR guy planting stories wherever I could find a friendly ear. It wasn’t easy at first. But I stuck with it because I knew I was on to something. It’s not a big deal, just 5 letters riffing on the rhyming sounds of the sci-fi term. I didn’t really do much. But like Woody Allen once said, success is just showing up to work every day. That’s what I’ve done for the past 5 years without any days off or a vacation. I don’t travel, I don’t go on cruises, I don’t fly, I don’t own a car, I don’t vacation anymore. For me, life is one long vacation if you are doing what you want, and I am.  I’m never bored. I wake up every morning full of positive energy and optimism. It’s in my DNA.

Have you written any climate fiction yourself?

No. I am not a novelist or a screenwriter. I am only good at writing short emails, 800-word op-eds and putting out tweets far and wide.

What role might cli-fi play in changing attitudes about global warming?

Just as the 1957 novel by Nevil Shute titled On the Beach (followed by the movie of the same title based on the book in 1959) helped raise awareness of the perils and dangers of nuclear war and ”nuclear winter,” I believe that cli-fi novels and movies will change attitudes about and awareness of global warming. Cli-fi is a global warning, a wakeup call, a warning flare, a cri du coeur. I really believe this.

Cli-fi appears either hopeful or dark and dystopian. Which outlook is most effective for changing attitudes about climate change?

I am not a literary theorist or a literary critic so I can’t say what cli-fi is or should be. My take is that cli-fi as genre is open to all points of view, and I leave it to the hard work and heavy lifting of our novelists and film directors worldwide to decide how they want to slant their stories. I like dark and dystopian cli-fi. I like utopian, optimistic cli-fi. I don’t take sides. I welcome everyone to the cli-fi tent.

How optimistic are you that humanity will get global warming under control?

I am not optimistic at all. I feel that humanity has just 30 generations more to prepare for the doomsday, for the end of humankind, for the end of our species and that we can use this time to help prepare future generations to accept their fate and learn to lie down and die at that time, around 500 years from now, with grace and dignity, spiritual grace and spiritual dignity. I see it coming by the year 2500.

Where do you see cli-fi going from here as a genre?

I see it continuing to grow and evolve for the rest of the 21st century and well into the 22nd century and even for the next 500 years.

Welcome to Planet A. There is no Planet B.

Do you think cli-fi might change attitudes more effectively than scientific facts? What cli-fi have you read that you particularly liked?

Next Post: Global Warming or Climate Change – Black or White?